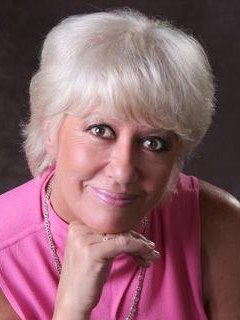 Babs, as I mentioned when I spoke to you, I have recently started this website - Jamaica-No-Problem.com. And on it I am featuring ordinary, everyday Jamaicans who have achieved something special, and out of the ordinary in their life, and who in many cases have received very little recognition for their achievements. I really appreciate you agreeing to do this interview.

You have a remarkable talent, and your art is very special  ... You now have a Barbara Reynolds Art Facebook Page.

Yes, I have recently put up a Barbara Reynolds Art Page. The paintings you see there have all been sold. And I have a few in galleries in Jamaica and in South Beach, Florida.
I like to paint to order now as people from the Tropics have a different taste in painting. 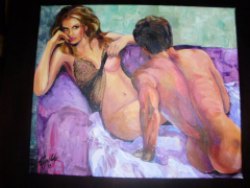 You were born in Jamaica?

Yes, in Port Antonio ... today is my birthday ... Valentines day.

Great! Hope you have a good day. I believe you went to school on the Isle of Wight in the UK with my sister Sally. Any particular memories of, or reflections on this period in your life that you want to mention?

Great memories - Extraordinary teachers, and hated the English weather. Now, I am extremely grateful for the experience, and the learning.

Were you interested in art at school, or did this come later?

I won an Art Scholarship at age 10 to an American Art School, but had to defer it, and eventually went to school on the Isle of Wight where Art was my everything. School was always second.

Did you study art as a profession, or has it just been a hobby?

At school, as well as doing "Art" I also did "Extra Art" - to fill every spare moment I had.
And then I went to Paris and studied painting and graphic design at L'Academie Charpentier, otherwise known as L'Ecole Nationale Superieure aux Arts Decoratif.
One of the highlights of my time there was meeting Pablo Picasso.

Fanatastic. If my memory is correct I did not meet you until the early 1980's. You were very close friends with Melody Ann, who eventually became my wife after a 9 year pursuit ... and with a bit of prompting from you.
I don't recollect seeing much of your art back then. Was this something that came later? Or were you a practicing commercial artist at the time?

I was on a break from Commercial work - which I had done for many years - 30 yrs as an Art Director.

They are all my favourites as while I am painting them I feel "Connected to the Canvas".
I miss the ones that have been stolen.

Several have been stolen. One was stolen in a home robbery in New York. Two were stolen by a "FRIEND" in California. She moved to France.
2 more were stolen in Jamaica ... "Rastaman" and "Boy with Breadfruits on His Head" ... so if anyone sees these two ... THEY WERE STOLEN!

You now title yourself as a Creative Director on Facebook?

I have worked in Advertising and Printing companies in Jamaica and Canada - As an Art Director and a Creative Director.

Do you do art shows?

Sometimes. My last show was at the Bellagio Casino in Las Vegas two years ago.

You have one sister?

You have three daughters. Nicola, Tamra and the youngest one Chrystal, who is my God-daughter. She grew up in Jamaica, is now touring the world, and creating quite a sensation as a singer - Kaya Jones. A former Pussycat Doll, she is now on her own.
You must be very proud of her, but I don't recall any particular musical talents as a 6 year old.
How and when did she develop her musical talents?

She was always a dramatic little girl. So I sent her to Drama School, Music School (she plays the violin), and Dancing School.
We never thought of singing. She did not even "go there".
She discovered she had a fabulous voice by accident.

Do you still call her Chrystal or has she totally become Kaya?

Did she inherit her singing talents from you?

Nooooooo-I cannot sing at all!

Where to now for her and for you?

I still paint, and she is doing amazingly well with her career.

Does she allow you to still keep watch over her? Or is she totally her own boss?

She is her own boss ... But she will always be my baby!

I don't know if she classes herself as Jamaican, or Canadian, or American?

She is Canadian and American - she was born in Canada and her father is American.

We will still claim her - her mother is Jamaican, and she grew up in Jamaica.

Babs thank you very much. And good luck to yourself and Kaya.

To write a review or just tell YOUR story  scroll down below the comments section.

What Do YOU Know About Barbara Reynolds?

Go back to the top of Barbara Reynolds