The Routes to My Roots
and Marcus Mosiah Garvey 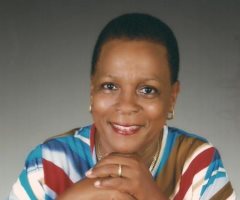 Valerie Dixon's search for her roots lead her back to Marcus Garvey, via her early childhood. She says "I did not know I was black until it was time for me to attend Primary School during the 1950s".

My mother (like most mothers in those days) wanted "the best" for her children and it was her ambition that her four girls should attend the Anglican Church’s primary school, situated in downtown Kingston.

My mother took me and my sister to the school on the first Monday in January and I immediately realized that something was not right. Even though I was only six years old.

All the children who were "light-skinned" and had long or "good" hair were corralled into a classroom and were told which class they would be placed in.

The mothers with the dark-skinned children (I was one of them) were told and directed to go down the lane to the Catholic Primary School and "Sister" would be happy to admit them to that school.

My mother promptly told the high brown-skinned headmistress that she had placed her other daughter in a class and that I needed to be placed as well.

The headmistress looked me up and down and told my mother that I would have to be "tested".

She took my slate that was hung from my neck and placed the longest addition-sum that I had ever seen in my short life.

I felt the lump that was beginning to form in my throat, because I knew it was beyond my ability, as I had not reached that far in the principles of addition at the private school (now called Basic School) that I was coming from.

With all the goading and prompting from my mother, I knew it was a hopeless case.

The headmistress declared that I had "failed" the test, so it justified her rejection of me and she proceeded to lock the school door in our faces.

I felt my mother’s disappointment and the lump in my throat grew even larger and the tears gushed, no matter how hard I tried to control them, when I saw my younger brown-skinned sister making new friends, oblivious to my distress.

But my mother did not join the throng of black mothers with their black daughters heading down the lane to go see "Sister"and gain admission for their children to attend the Catholic School.

She took a seat on the perimeter-wall of the school and said not a word to me.

A few minutes later, the bell for recess sounded and the doors flew open and brown-skinned children poured out- gleeful and with great gaiety.

Like a patient cat my mother sprang into action. She put my little school bag into my hand and said in a commanding manner "Go find a seat". And with that she walked up the lane and was soon out of sight.

I dried my eyes, and inside I quaked as I pondered what my fate would be when recess ended and I was sitting in someone’s chair.

Sure enough the owner for the chair returned from break and demanded her seat.

I got up and looked at the headmistress with eyes that said "Well, what are you going to do now?"

She realized that my mother had beaten her in this game and she resolved the matter by giving me a seat at the boys' table.

It was in later years that I realized I should go to her grave and thank her for this "punishment".

Everyone knows that little boys don’t necessarily like little girls and to compound it, these were little brown boys who were socialized not to like little black girls.

Our table became a force to be reckoned with. I gained acceptance and I acquired traits (both positive and negative) that will never desert me.

This experience made me determined and resolute to solve the mystery as to why I am so dark in complexion, in comparison to my three brown-skinned sisters although we are from the same mother and father.

My search for my "roots" also coincided with the story my white form mistress in High School told me about the mysterious group of people that are called "Maroons".

I sat enthralled and transfixed when she recounted how these people are the only people (to date) to beat the British in a war that was waged for 27 years.

My little black heart swelled with pride and then she "burst my bubble" by describing how Chief Cudjoe bowed down and kissed Colonel John Guthrie’s feet to show how "grateful" he was that the British had signed a Peace Treaty with the Maroons.

I sensed that this was a lie and I have now found the truth about this action that was performed by Chief Cudjoe and his men.

Little did I know that my quest would lead me to Charles Town (a Maroon community) as I was told by a newly found grand-uncle that I am descended from Maroon stock and that my ancestors were fierce and highly ranked fighters.

It was Nanny's, Cudjoe's and Tacky's armies that gave guerilla warfare and the art of camouflage to the world, as they would surprise the English soldiers marching in their bright scarlet-red army coats and beat them to sickness.

Today, in the twenty-first century, soldiers from the developed countries wear camouflage uniforms as if they invented them.

My grand-uncle (who was very black in complexion) told me that a part of the family moved to South Manchester and so the search was brought closer home, as Manchester is my home parish.

There are no coincidences in life, as everything is always in its rightful place.

I followed the routes and found family in Newport and Resource and in searching for my roots, I was led to our first national hero, Marcus Mosiah Garvey, who began his early work in (believe it or not) Resource, South Manchester

Valerie Dixon is President of the International Community Tourism Institute, and is responsible for co-ordinating the community training for the Villages as Businesses program.

She is also a lecturer, and frequent contributor to the Gleaner and other publications.

Go back to the top of Valerie Dixon