The Black River Safari was started many years ago by my friend Charles Swaby ... one of a rare breed ... with a genuine passion for Nature and the Ecology.

It is a guided motor launch tour, lasting about 1 1/2 hours, starting from the town of Black River, and going up into the Black River Lower Morass, Jamaica's largest wetand area

You travel about six miles up what was thought to be the longest river in Jamaica at 33 miles long, but it has recently lost that title to the Rio Minho now found to be just over 50 miles long. 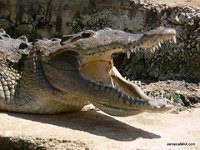 Immediately you begin to keep an eye out for crocodiles (the American crocodile - Crocodylus acutus) which have been known to wander out into the harbour and even along the coast.

Your journey takes you through mangrove swamps ... and and as you go further upstream through Jamaica's largest wetland area ... the Black River Lower Morass ... with Royal Palms and Thatch Palms dotted around.

You go past the point where the YS river joins the Black River. The YS river is the home of the nearby YS Falls.

There are over 100 recorded species of bird in the Black River Morass ... and it is likely that you will see many of these during your trip.

A trip ... done more times than I can remember ... was always enjoyed by my visiting friends ... and we always used to stop for some refreshment at a little thatch roofed hut on the river bank before setting off on the return journey.

I have no hesitation in recommending the Black River Safari.

And while you are in this area a visit to YS falls is well worth considering. They are privately owned and not nearly as commercialized as Dunns River Falls,

Go back to the top of Black River Safari

Related pages are Attractions in Jamaica and Black River