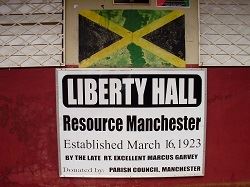 Marcus Garvey was born and given the names Marcus Mosiah Garvey in St Ann's Bay on 17th August 1887.

He only visited Resource Village for a few months, so what is the connection between this small village and this great man?

Mortimer Henriques, a Jamaican of Jewish origin, lived in Resource Village in the foothills of South Manchester.

He was called up to serve in the first World War and in passing through London he was extrememly impressed when he heard Marcus Garvey, who was living in London at the time, speak about Black pride, Black dignity and Black self-awareness.

Later in America Garvey successfully gained the support of millions of African Americans for his many enterprizes.

He set up the Universal Negro Improvement Association (U.N.I.A.) and African Community's League (A.C.L.) in August 1914.

He started the Black Star Line in 1919, a shipping company, to take African-Americans back to Africa.

He later established the Negro Factories Corporation, which ran a publishing house, grocery stores, a fleet of vans, a restaurant, and a laundry.

Mortimer Henriques, now back at his home in Resource after the war, saw an advertisement offering shares in the Black Star Line.

Realizing that this was the same person whose speaches he had been so impressed with, he persuaded the villagers in Resource to invest in this scheme and to join the Universal Negro Improvement Associaiton.

Marcus Garvey was so appreciative of the support he had recieved from the small village of Resource, that on a visit to Jamaica in February 1923 he visited Resource and stayed for a few months.

The people grew to love and respect him so much that two villagers, Sarah Wilson and Rueben Bennett, donated a piece of land to him.

Garvey asked that a Liberty Hall, named after his Headquarters in New York, be built on this land to house the Resource Chapter of his Universal Negro Improvement Association.

Today there is a still unfinished structure, and the Liberty Hall Basic School on this land. 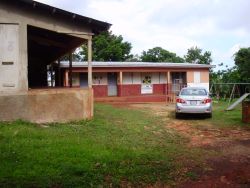 Garvey asked that a Liberty Hall, named after his Headquarters in New York, be built on this land to house the Resource Chapter of his Universal Negro Improvement Association.

Today there is a still unfinished structure, and the Liberty Hall Basic School on this land.

The Marcus Garvey Fair is held in Resource Village annually.

Garvey's success in influencing Black Americans earned him the hostility and suspicion of the U.S. government.

And although Garvey raised over $600,000, a fortune at that time, the Black Star Line collapsed in 1922. So, on his return to America in 1923, the U.S. authorities successfully prosecuted and convicted Garvey for fraud in connection with the selling of shares in the Black Star Line.

To this day the legitimacy of his prosecution is questioned.

And even more so, because after serving only a two year sentence, he and was released and immediately deported to Jamaica.

Ironically, in 2011 President Obama's White House rejected an application to posthumously pardon Marcus Mosiah Garvey, who was by then Jamaica's First National Hero, and thus rectify this reputed miscarriage of justice.

Marcus Mosiah Garvey later moved to London, and died there on June 10th, 1940.

On November 11th, 1964 he was declared Jamaica's first national hero, and buried in the Marcus Garvey Memorial in National Heroes Park in Kingston.

You can view and download Countrystyle's Resource Village Brochure by clicking this link, or you contact Diana at Countrystyle for further information.

Go back to top of Marcus Garvey